The Sly Cooper series is really cool as it mixes stealth and platforming in a way it that it feels incredibly fun. However, despite the series having a great mix of gameplay and not having a bad game in the series, the series doesn’t seem to get the attention it deserves.

Does Sly Cooper: Thieves in Time add on to the stellar track record of the previous games in the series? Let’s find out.

Thieves in Time has cel-shaded graphical style and even now in 2019, it still looks gorgeous. Each area you travel to all look different and are a delight to look at, especially the Wild West level. Every character is visually appealing and that is largely thanks to the cel-shaded art style.

Thieves in Time is a prime of example of a game looking fantastic visually without the need to go for “ultra-realistic” graphics. Thieves in Time was released in 2013 and 6 years later it still looks amazing.

The gameplay is largely the same as the previous games but with a few new gimmicks to freshen things up. The mechanics that have made their way from the previous instalments have been refined and are at the highest quality here.

There are multiple playable characters in Thieves in Time and each one plays differently. Sly, Murray and Bentley pretty much play the same as previous games but with a few new moves. Carmelita is playable and her gameplay feels similar to Ratchet and Clank which is good as I love Ratchet and Clank.

Each member of the Cooper clan that you will meet throughout the game is playable and each one of them has a unique gimmick. Rioichi Cooper has a mechanic that allows you to leap very long distances, that you wouldn’t be able to make with a normal jump. Tennessee Kid Cooper’s cane can switch into a six-shot revolver which is very satisfying to use.

There are small two negatives concerning the gameplay, the main one being Bentley’s gameplay. Whilst he does control much better than previous games, his combat mechanics are not good with dealing with close range enemies. It’s better to move past enemies undetected with Bentley. A more powerful melee attack would have helped Bentley be a bit more enjoyable. The other negative is the camera, which was clunky at times.

The camera works for the most part but it will have moments where it doesn’t want to work properly for some reason. It’s not game breaking but it can be annoying when the camera issues occur.

Thieves in Time takes place after the events of the third game, Honor Among Thieves, where each member of the gang (Sly Cooper, Murray and Bentley) of thieves is off doing their own things. As you’d expect this peace couldn’t last forever as words from the Thievius Raccoonus start to disappear, thus damaging the Cooper family history and Penelope (Bentley’s girlfriend) disappears. The gang reforms to travel through time to recover the lost words, find Penelope and discover who’s responsible for the events that have taken place.

The story is actually rather good and quite compelling at times. There are several moments in the game that gripped me and made me want to replay the older titles. Sure it’s no Red Dead Redemption 2 but for a platformer, I was quite enthralled with the story that was playing out.

I would also like to give props to the writing team as the dialogue just seems to have been written better (there was nothing wrong with the writing of the previous game). The conversations between each member of the gang really do help build that feeling of comradeship. If you’re a fan of the humour in Sly Cooper then don’t fret, this game has plenty of funny moments and nearly of the jokes land well.

Firstly, I would like to say that the main theme for Thieves in Time is really damn good. Secondly, the music for each level is fantastic. The music is really good throughout and some of the tunes are rather catchy. 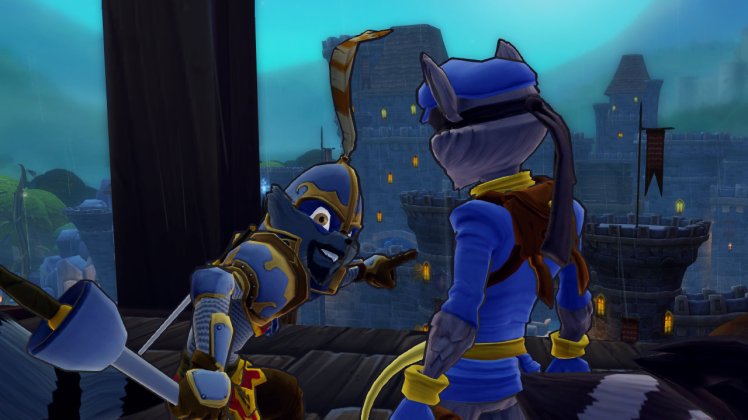 Sly Cooper: Thieves in Time has a prologue, 5 quite big levels and an epilogue. Each of the 5 levels will take anywhere between -3 hours to complete and another hour or so to mop up all of the collectables. Completing the game’s main story will take you around 10-15 hours. Doing everything that game offers will run the total playtime to 20+ hours.

The game is a lot of fun and if you’re a die-hard fan of the Sly Cooper series, you’ll be able to get a bit of replay value from it. 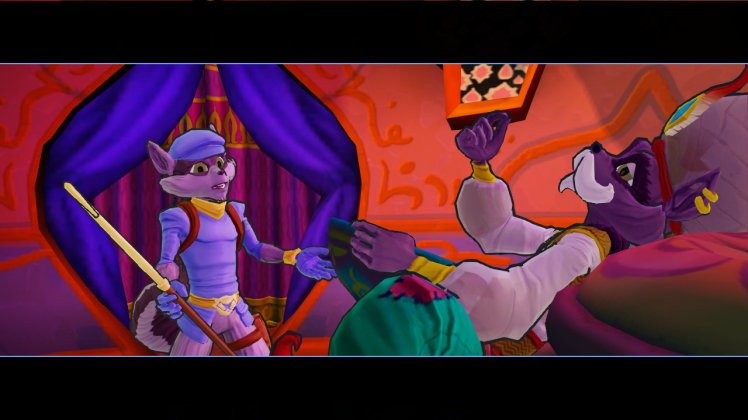 Thieves in Time is yet another fantastic entry into the series and anyone that loves the platformer genre should give this a shot. It’s a very enjoyable experience with very few issues.

However, 6 years after Thieves in Time was released it appears that the series still has yet to receive the attention that it has earned. It’s a shame that the Sly Cooper series seems to have faded away into the annals of gaming history. If Thieves in Time is the last Sly Cooper game we got (which I hope isn’t the case), then what a phenomenal game to end on.

Another fantastic game in a brilliant yet sadly overshadowed series. I hope that one day Sony brings this series back and realises what a gem they have.