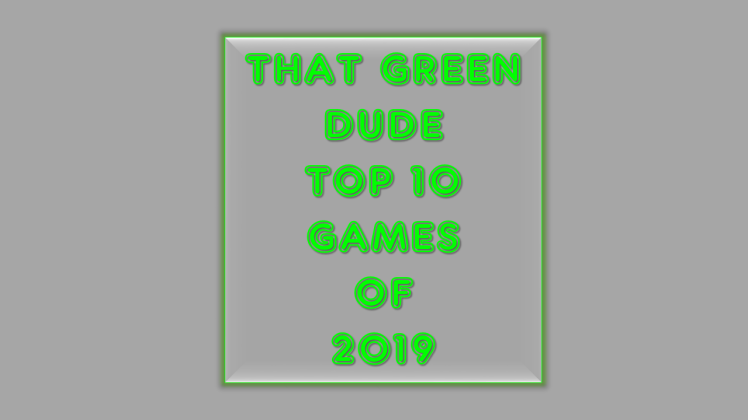 2019 gave us some fantastic games with compelling stories, engaging characters and awesome gameplay. There are some games on this list that I have been waiting for several years and thankfully the wait paid off. Where do these long-awaited games appear on my list? That’s what we’re going to find out. Here are my top 10 games of 2019.

I’ve been asking for a remake or a return of MediEvil and its silly but lovable hero Sir Daniel Fortesque, for a while now and we got that in 2019. What we got was a remake of the PS1 classic and it was brilliant revisiting this game with a new coat of paint.

I have to admit, I cried whilst playing MediEvil. I have many fond memories of the original PS1 game and seeing the game return from the dead and looking really good made me emotional.

The game is janky and clunky but so was the original and I love that it isn’t perfect. I had a smile on my face throughout the entire game. MediEvil ain’t perfect, I know that but to me, it’s priceless.

Untitled Goose Game is daft, silly and outrageously fun. You play as a goose and your objective is to be an unapologetic honking asshole. That alone made me want to play the game and goddamn is it fun. It’s a short game but it’s just right in terms of length.

Why is Untitled Goose Game in my top 10 games list? It’s simple, you play as a goose. HONK!

I was looking forward to Concrete Genie ever since it was announced a while back. Its art style and premise intrigued me, it looked different and gave me Majin and the Forsaken Kingdom vibes.

You play as Ash who is a gifted artist and has done many sketches but has them cruelly snatched away from him and thrown away by bullies. The aim of the game is to get all of Ash’s sketches back and return light and colour to the town of Denska.

Concrete Genie isn’t a huge game and it sadly flew under the radar of many but please, if you haven’t played this game, then do so. This game has a lot of heart and you can see the developers love and passion shine brightly. This game tells a great story, one that everyone should experience. Please play this wonderfully creative game.

Gearbox’s looter shooter went missing for several years after the release of Borderlands The Pre-Sequel and I like many others, were left wondering when Borderlands 3 would arrive. Fortunately, in 2019 the third main entry arrived and goddamn was it fun.

This time we weren’t stuck on Pandora, there were several planets to explore and loot. Every planet had different architecture, art styles and enemies. Each world was very different and offered a lot of variety.

Borderlands 3 also introduced us to 4 new vault hunters and I chose Fl4k the Beastmaster. I loved playing as him and having a pet Skag following me and helping me in battle. The story was good but I feel ass though Gearbox played it a bit safe which is fine.

Borderlands 3 is more of the same which is perfectly fine with me. More Borderlands is good and I for one can’t wait for the next one. 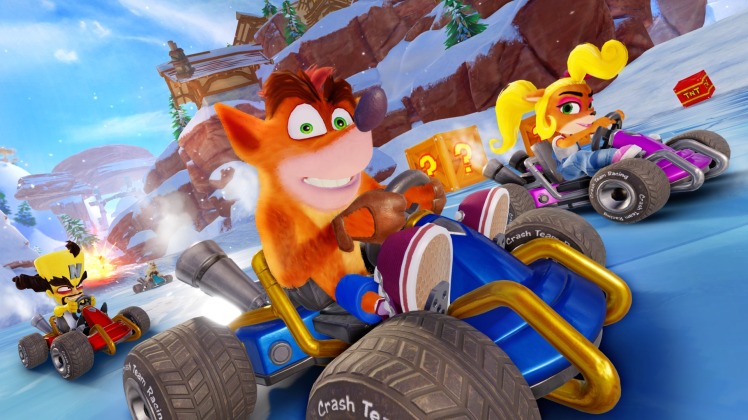 Fast-forward to now and the game has been released and goddamn it’s fun and man does it look beautiful. Since its release, I have spent and an ungodly amount of time playing this game and I will continue to do so in the future. As I went through Adventure Mode, all of my memories came flooding back and it was wonderful.

One of my favourite kart racers is back and looks better than ever. I can’t wait to see the future of the Crash karting series.

I played Days Gone thinking it would be a good game but what I got was something better, I played one of the best games of 2019. Days Gone is an open-world survival game where you play as Deacon St John, a biker who is looking for his wife in the hellish world.

Deacon is a great character, one that took me by surprise by just how good he is. Seriously, Sony Bend’s writing team should be proud of themselves as Deacon and the story of Days Gone are things I won’t forget about.

I remember looking at the Game Informer previews prior to release and thinking that Days Gone looks like if Resident Evil went open-world. After playing it I can say that it definitely felt like that. Kudos Sony Bend, you made one hell of a game and I’m excited to see what you do next.

Ryu Ga Gotoku Studios gave us yet another fantastic game this year called Judgment. This game is set in the same universe as the Yakuza games which makes Judgment all the more interesting as this time you aren’t a member/ former member of the Yakuza, you’re a private detective.

The lead in this tale is Takayuki Yagami, a disgraced lawyer turned private detective who tries to find out what is going on with a string of strange murders. The story of Judgment is absolutely incredible and is arguably one of the best the studio has put out.

The gameplay is the beat ’em up, brawler style that the studio is known for but this time with some changes, all of which are welcome. The combat in Judgment is more martial-arts inspired than before and I am 100% in on that.

This studio very rarely puts a foot wrong and once again they delivered. Now let’s see if Yakuza 7/ Like a Dragon will make my top games of 2020. 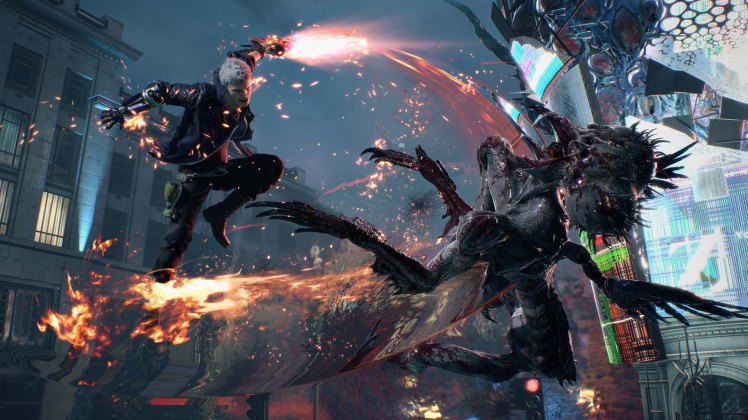 Dante is back! Nero is back! Most importantly, the king of hack n’ slashers is back. Devil May Cry is back and it is better than ever. HOLY FUCKING SHIT THAT WAS COOL! I must have said that about 500 times whilst I played Devil May Cry 5 as this game oozes coolness. If this game was anymore cool, it would be the Antarctic.

The combat in this game is smooth as hell, one of the best combat systems I have ever played in a video game. All three characters (Nero, Dante and V) play different and control very well. DMC 5’s story is pretty damn good as well, especially if you’re a longtime fan of the series.

The music, sweet donkey biscuits on a Sunday morning is the music good. Nero’s battle theme “Devil Trigger” is fantastic and I’ve lost track on how many times I’ve listened to it. DMC 5 uses the RE Engine and dear god does the game look good. Devil May Cry 5 is quite possibly one of the best looking games of 2019.

I and many others have waited a hell of a long time for Devil May Cry 5 and it didn’t disappoint. It was fast, fun, frantic and visually stunning. I loved every minute of Devil May Cry 5. I have a question for Capcom, can you please not take as long to make DMC 6? I don’t think I can wait that long again for something that fun.

The game I have been waiting over ten years for finally released in 2019, that game was Kingdom Hearts III. I love this series and its convoluted as hell plot with all my heart (pun abso-goddamn-lutely intended). I knew going into Kingdom Hearts 3, that this game wasn’t going to answer every question and deliver on all of my expectations. This was a game that I had waited so long for but what we got was good, incredibly fun and goddamn if it didn’t get me teary-eyed.

I was crying I got back home from the store. Crying because I couldn’t believe that I had this game in my hands, crying because this game was actually real. I was crying when I finished the game, crying not because of what happened but also because the Xehanort Saga had finally come to an end. This story which I followed from when I was a kid had reached a conclusion.

I know that for some people this game underdelivered but for me, it didn’t. Kingdom Hearts 3 was fun, beautiful and colourful. This game stole my heart and I’m happy that it did.

I was eagerly waiting for the remake of Resident Evil 2 since the game was announced to be in production all the way in 2015. 4 years later, not only do we have the game but in my opinion the best entry in the series but also my Game of the Year.

The long-awaited remake of the survival-horror classic blew my expectations out of the water. I was thinking we would get a good remake but not on the level we got. What Capcom gave us is near perfection, a masterclass on how to remake a game. Every other developer doing remakes should look at Capcom and RE2 Remake, as this is how you do a remake whilst still being faithful to the series and damn good fun.

How good is Resident Evil 2? Really damn good. It’s that good that it replaced Resident Evil 3 to be my favourite game in the series. Guess what? Capcom is remaking Resident Evil 3 and if they put in the same amount of love and care into that as they did with RE2 Remake, I think Capcom might claim the top spot again next year. Now if they would just remake Dino Crisis already, that would make me the happiest gamer in the world.

That’s it, folks! These are my top 10 games of 2019, what are yours? Let me know in the comments below or tell me on Twitter – @ThatGreenDude95