What should Lizardcube bring back next?

Streets of Rage 4 is incredible, one of the best beat em ups I’ve ever played. It is faithful to what made the series so good, the controls and gameplay are brilliant and the visual style is an absolute delight.

I played through the game on Twitch with a few people watching and I had a blast with it. I’m glad I was able to share that experience with other people. I started talking with the viewers about what other games, mainly Sega titles, that these guys can bring back. We came up with a few and it gave me an idea, why not write up a list on my blog. I’ve been meaning to write this up for a little while not but last week WordPress decided to delete every draft I had.

Anyway, I’ve been rambling for long enough. Here’s the list of games I think Lizardcube should bring back.

Fast planes, kick ass soundtrack and a lot of intense action, what more could you want? Well… a new Afterburner would be nice.

What could Lizardcube do? Co-op Afterburner is something that needs to happen in a new entry. Two planes flying at super speed, side by side sounds amazing. A story mode would be cool, it would have to be 90s cheesy though. We don’t need a super serious story, just some good old 90s action movie cheesiness. A challenge mode would be cool. Requirements like, only get hit once or you can only use this weapon and the reward can be a cosmetic unlock. Imagine completing a challenge and you unlock a flame skin for your plane. Sounds cool doesn’t it?

It’s been too long since we’ve had an Afterburner game and I’d trust these guys to bring the series back in style.

Hold on I know what your thinking, a 2D Virtua Fighter wouldn’t be Virtua Fighter. Virtua Fighter has done a spin-off title before called Virtua Fighter kids. However, given that its been so long since we’ve had a new Virtua Fighter, would people even be mad at the idea of a 2D game. I genuinely think that if this was announced, people would be be thankful that Sega remembered that they have a fantastic fighting game franchise.

What could Lizardcube do? Have the game retain all of the modes that Virtua Fighter is known for, so old school fans are happy. Bringing back Quest mode would be great. It was a fantastic addition to VF5. Online multiplayer with rollback netcode is a must.

If you want to know if Lizardcube could pull off a 2D Virtua Fighter, just look at Streets of Rage 4. That recently recently released title is all the proof you need to tell you that they’ll do a damn good job.

Yeah, yeah, yeah. When I think of Crazy Taxi, the music from The Offspring comes into my head, it’s iconic. Crazy Taxi is a dumb fun game that is an absolute blast from the offset.

The series has sadly not seen much activity bar from a few mobile things but what we need is a new full on console Crazy Taxi.

What could Lizardcube do? They can just simply remaster the original game and I’d be fine with that but if they were to do a brand new release then why not have multiple play areas (about 4) that are fairly expansive. A story mode where you have to rise up through the taxi driver ranks in order to become the best taxi driver and get the illustrious S Class license.

It’s just a bunch of ideas but I trust Lizardcube to pull it off, if they decide to bring back Crazy Taxi.

One of most iconic arcade racers of all time needs to come back. Outrun is a brilliant arcade racer that has one of the most delightful soundtracks in the history of gaming. It’s visual style is gorgeous and watching that red Ferrari zoom forwards is calming.

What can Lizardcube do? A story mode for Outrun would be cool. The story could be you and your wife are on a around-the-world roadtrip and your goal, is to make as many memories as possible by reaching each destination before time runs out. This allows for there to be a story but also keeps the old school Outrun gameplay that we all know and love.

Online multiplayer would be cool. Have 2 players race against each other to see who goes the furthest before time runs out or they lose all of their continues. Customisation would be cool. If there were in-game challenges that unlocked different colour schemes for our car or maybe even a different car altogether. It all adds replay value.

I’d love to see Outrun come back. It’s been far too long since we’ve had an Outrun. I’ve missed those fast yet chill drives into the distance and I know Lizardcube can go the distance.

ROLLING START!!! Sega has got a lot of iconic music with its games, one of the most famous being Daytona USA.

What can Lizardcube do? A Grand Prix mode where we have to do a series of races, earning points in each one to earn the big gold trophy. An essential thing is online multiplayer. Online Daytona would be a blast, until some bashes you off the track that is.

The chances of this happening though are slim, as I remember reading a while back, that there is some issue concerning the licensing with Daytona. I won’t lose hope though. I hope that one day I can once again sing DAYTONA from the top of my voice. 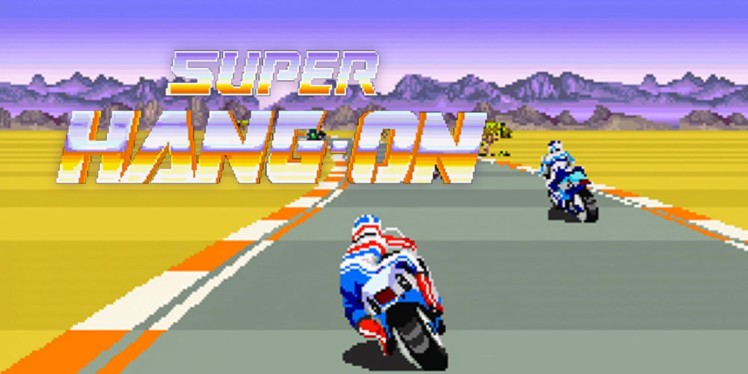 I love Outrun but there’s something about Super Hang-on that keeps me hooked. I think its because Super Hang-on requires a bit more focus as it is much easier to make a mistake. Much like Outrun, Super Hang-on has a brilliant soundtrack.

What could Lizardcube do? A Grand Prix mode where we have to compete in a series of races all over the world in order to win the Sega Gold Cup. Elimination mode could have about 16 racers all compete to be at the front but whoever is at the back when time runs out, get eliminated. Cosmetic stuff like having Jacky Bryant as a racer on the bike or Blaze from Streets of Rage 4, just to make it feel more Sega. Online multiplayer would be good for a new Super Hang-on.

A new Super Hang-on would be incredible and Lizardcube don’t do it, then what about the studio behind Horizon Chase Turbo. That wonderful developer could also do it and do it very well.

My first exposure to this game was in the Yakuza games. As soon as I played it, I was hooked but it looks as though like many of Sega’s old arcade games, to have gotten lost in the annals of time. However, I believe that it is time for Space Harrier to come back.

What could Lizardcube do? A full on campaign mode, where the hero has to take on and invading alien force that wants to take over Earth and the entire galaxy. All of the bosses and enemies from the original would return along with some new baddies for us to defeat. Co-op Space Harrier would be cool as ot could lead to friends taking down the aliens together which is cool.

Lizardcube would knock this out of the park but I also have another idea about how Space Harrier could come back but from a different developer. I may explore this idea in a future article.

That’s it folks. What would you like to Lizardcube bring back? Let me know in the comments below.

I live stream on Twitch – ThatGreenDude95