Deep down there’s a light that never goes out 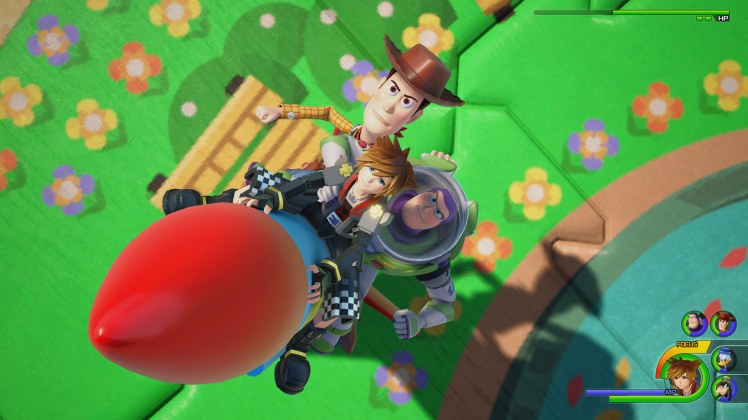 Back in September I went to EGX and was lucky enough to play Kingdom Hearts III, a game that I have been waiting a very, very long time for. When the game was announced to be playable at EGX, I bought my ticket faster than Sonic the Hedgehog can run.

So it’s been a while since EGX and this would have been written a few weeks ago but WordPress thought it would be a good idea to delete my draft of it. This meant that I had to start this from scratch. However, enough of that, you’ve come here to read about Kingdom Hearts III and my thoughts about the game.

Well, I can safely say that what I played did not disappoint and I left with the biggest possible smile I could make. That said, however, there are a couple of things that I didn’t like but hopefully, these can be easily fixed. To clarify, the demo I played was the Premium Showcase demo that has been playable at many gaming conventions around the world. I spent time in two worlds, Olympus (Hercules) and Toy Box (Toy Story). 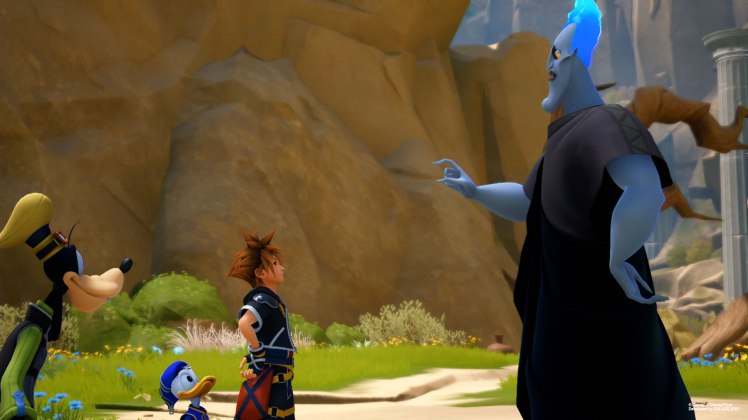 My time with Olympus was short but sweet. The demo tasked me with taking on the Rock Titan, a huge hulking behemoth that is wreaking havoc. This part of the demo immediately tells you about Kingdom Hearts 3’s movement system and the ability to run up and along walls.

Once I reached a certain point I came across some Heartless, one of the types of enemies you’ll come across in the game. This neatly introduced me to the combat system and I can say that it has never felt better. The combat is fast, fluid and bloody good fun. I was able to launch enemies into the air and combo them, cast spells and do Limit Attacks with Donald and Goofy. It all just flows really well but more on combat and gameplay later.

I come up to a point where I have to run up a cliff face and dodge boulders that the Rock Titan is throwing at me. Once I was at the top I had to attack his feet to bring him down so I could climb up to his heads and attack them. After a few hits, I was able to do an Attraction Flow and I summoned the Big Magic Mountain train. The train went around the Rock Titan and I was able to damage it with Chimney Flare, an attack that hits the titan with projectiles. I could also dodge and deflect the titan’s attacks whilst I was on the train and I have to say, it all looked very cool in action and not once did the frame rate drop.

Big Magic Mountain makes short work of the Rock Titan and I defeat him and my time with Olympus ended. I would have liked to explore more of the world of Olympus but, the demo I played is great at showcasing how gorgeous the game looks.

Now I knew that Toy Story was in the game before I went to EGX but seeing it in person made me tear up. Toy Story is one of my favourite film series of all time, I’ve watched the films with my family and I have many fond memories of them. Seeing Toy Story in Kingdom Hearts 3, a world I wanted to see since the first game, made me stop and just look at the screen and pan the camera just to make sure it was real. Enough of me gushing about my love for Toy Story. I spent around 20/25 minutes with the Toy Story part of the demo so I was able to get to grips with more of the game’s mechanics.

The voice actors for the Toy Story crew are pretty much identical, the exceptions being Buzz Lightyear and Woody who are voiced by Tim Allen and Tom Hanks respectively. Their replacements though do a stellar job of the characters so big fans of Toy Story (like myself) should be pleased.

As I played through the Olympus level I thought that the game was beautiful but the much brighter and colourful Toy Story is simply breathtaking. It is pure eye candy, the colours instantly pop, it’s all vibrant and loud. It’s really pleasing to the eye. The only thing that is more pleasing to the eye is how accurately they have recreated Andy’s Room and the outside of the house.

The story for the Toy Box world is that some of the Toy Story crew have gone missing and the remaining members have been trying to find them. Sora and the gang appear in toy form and they look the part, however, they pretty much instantly run into Heartless. Woody, Buzz and the gang exchange a few words and then we have to go through the window and make our way to Galaxy Toys.

Galaxy Toys is wonderful, it is huge and is effectively one big playground. Seriously, where was this toy store when I was a kid? If you look back at the entrance you can see a Pizza Planet car. I don’t know if this means we’ll get to go to Pizza Planet but if we do I will probably overload on nostalgia and emotions.

Whilst at Galaxy Toys I took control of a Gigas mech which helped me to fight other Gigas mechs that had been taken over by the Heartless. The gameplay for the Gigas was rather fun, you had one melee attack, one projectile attack and a dash. Once the opposing group of Gigas have been defeated, Young Xehanort appears and a cutscene happens. Shortly after, the Toy Story portion of the demo ends.

I enjoyed the Toy Box world so much, the only downside was that my family couldn’t see it in person. My family (especially my mom and dad) are looking forward to seeing Toy Story in Kingdom Hearts 3.

I’ve touched upon gameplay a little bit already but I’ll go into more depth here. As mentioned before combat is fluid and better than it has ever been, thanks to an increase of speed and several welcome additions. One of those additions was introduced in 0.2 Birth By Sleep but has been refined here and that is being able to cast spells and move at the same time. It might not sound like a big deal but to me and other Kingdom Hearts players, it is. Casting spells in previous games required your character to stop and then perform the magic selected. Kingdom Hearts 3 allows you to cast magic whilst moving which means that the speed and the overall flow, doesn’t grind to a halt when you want to cast fire.

You can equip 3 different Keyblades and this really helps mix up and diversify the fighting. Each Keyblade has different stats and transformations, meaning that each one has a role to play and every Keyblade in your arsenal is now somewhat useful. In previous Kingdom Hearts games, once you got a more powerful Keyblade, you would never use the previous one again. I love being able to have 3 weapons to switch between to and I am looking forward to all the combos that can be done.

Each Keyblade has transformations which can turn the huge key weapon into a hammer, claws and even guns. They are really cool in motion and each one is unique and changes Sora’s appearance slightly. Some transformations are really helpful against certain enemies, one of them allows you to pick up the fat Heartless and fling them around. I could tell that I have only scratched the surface when it comes to Keyblade transformations and I can’t wait to see what the rest are like.

There are Link Attacks which act in a similar way to summons in previous games. During my time with the demo, I was able to Link Attack with Wreck-it-Ralph and Ariel. I’m not a fan of Ralph’s but I probably just need to spend more time with it. Ariel’s, on the other hand, is a thing of beauty and it is glorious. It does a lot of damage and it looks fantastic whilst doing so.

One thing I didn’t like was the amount of damage Attraction Flows can do. I used the Pirate Ship flow attack a couple of times and it decimated enemies quickly, too quickly. Now I don’t know what difficulty the demo was on but I could tell it was easier than normal or Proud. The demo itself was rather easy and I never went into danger, so maybe the Attraction Flows did so much damage because of the difficulty the demo was set on. It’s a slight annoyance that won’t bother me too much if it isn’t changed in the full game but I thought I should bring it up.

My biggest gripe during my time with Kingdom Hearts 3 was the gleam on the wall that indicates to the player that you can run up it. I don’t mind a faint glimmer or some form indication to let the player know that I can go up that surface but the gleam was bright and it stood out.

It took me out of the experience a bit as whilst I was admiring the work gone into recreating Andy’s room, that white gleam went up the walls. It was rather annoying and it baffles me that they would create a setting so beautiful, only for it to have a light go up it every few seconds. I hope that in the full game that there is a way to turn down the intensity of the gleam or to get rid of it completely.

I came away from my time with Kingdom Hearts 3 very happy and the few problems I have, can easily be fixed by the time the full game releases.

Longtime readers of my blog and those who know me personally know how much Kingdom Hearts means to me and what the games have done for me. They helped to make me smile when I was at my lowest and were one of the things that helped me not to make a very serious mistake, back when I was a teenager. If it wasn’t for Kingdom Hearts and a few other things, I probably wouldn’t be here now writing this.

That reason is why I am so thankful for having the opportunity to play the game early. It might sound like I’m getting a bit emotional and I am (I’m tearing up whilst writing this) but it feels so good to let these emotions out. They aren’t sad emotions, they’re happy. Happy that I have played Kingdom Hearts 3, happy that I am still here to do so.

I’ll leave you with this small bit that I wrote up on the train back from EGX. “There I was, playing the game with a smile on my face and tears forming in my eyes. Even though I was playing it, I couldn’t believe it was real.” It’s been nearly two months since EGX and guess what? I still can’t believe it is real, but it is.

We have just over two months until the release of Kingdom Hearts 3, the wait is almost over.