I love old-school FPS games like DOOM and Shadow Warrior. One game in that genre has always eluded me, Serious Sam. I never got round to playing the series as I was playing other video games. I looked through my download history on PS3 and saw Serious Sam 3 BFE, I got it for free via PS Plus at some point.

I had Serious Sam 3 BFE in my download history and no games coming out (this was late November, early December 2018), so I downloaded the game and gave it a go. I went in thinking that it will be just another fun FPS game. I was wrong, it wasn’t just fun. It was insane and I loved pretty much every second I played of it. 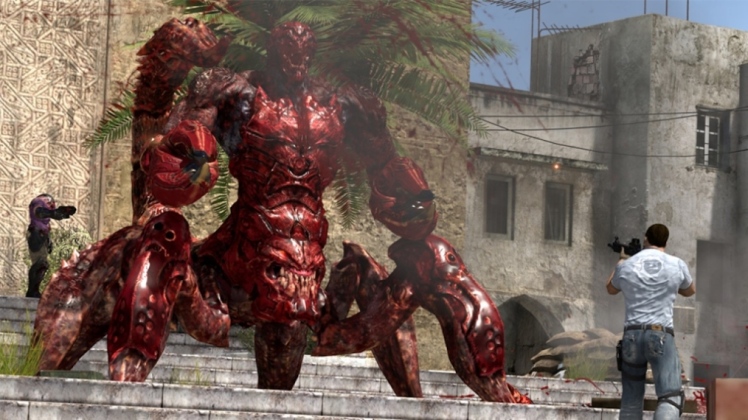 Sound is an area that Serious Sam does well. Each gun in your arsenal has a different and distinct sound effect and the same applies to the game’s many enemies.

The music is an area where Serious Sam 3 shines. As you shoot the aliens you’ll have the game’s score which is rather catchy. The best music is saved for boss fights. As you fight bosses, there will be a heavy metal guitar riffs and pounding drums. You could put on some Slayer or Megadeth whilst playing the game and it would feel just right.

Gameplay wise, Serious Sam 3 is solid. It’s an old-school style first-person shooter much like DOOM, Wolfenstein and Shadow Warrior. The speed of the gameplay is halfway between DOO. and Wolfenstein, fairly fast but not to the point you’ll be zipping all over the place (ala DOOM).

You have a wide variety of weapons all of which feel and look different and have that satisfying feeling when they connect with an enemy.

Serious Sam 3 starts off fairly easy but the difficulty ramps up after the halfway point, as more and stronger enemies are chucked at you. The amount of enemies that march towards you in the end stages of the game is crazy, it’s in the hundreds, possibly thousands. Even though you have a huge arsenal of weapons, you will start to ask yourself, “do I have enough ammo for all of these”? It keeps the tension going whilst still making you feel like a badass.

Every mission is replayable and there are multiple difficulties to tackle. The hardest difficulty is no joke, it is painful but if you’re up for a challenge there’s that. There’s also the trophy/ achievement list which you can go for and some of them require a lot of skill and patience.

The game is a lot of fun to play which helps with the replayability factor. I do think that this game would be awesome in co-op taking down enemies with friends would be another reason to play Serious Sam 3. Unfortunately, there is no co-op

Serious Sam 3 BFE is incredibly fun even if it does look fairly dated visually. Old-school FPS fans will be happy with this game as it delivers that style of gameplay in spades.

A must play for fans of the genre.