The boys are back in town

Ratchet and Clank are BACK!!! When Sony revealed Ratchet and Clank: Rift Apart at the PS5 reveal event I jumped up out of my chair with joy. Both Ratchet and Clank the characters and the series itself mean so much to me. I have so many fond memories of this series, it brought so much joy to my childhood.

My jaw dropped when I saw how beautiful the game looked and it dropped even lower when the dimensional shifts happened. It all looked incredible. However there is one thing at the end that caught everyone off guard. Let’s talk a little bit about the trailer.

Straight away, it is clear as day that this game is gorgeous. Rift Apart is visually stunning and was arguably the best looking game shown at the event. Ratchet and Clank have never looked better. Ratchet’s fur is impressively detailed and Clank looks even shinier than ever.

The environments are beautiful, they are more detailed and the gameplay spaces have more life in them which is good. Each of the different locations that were shown off in the trailer looked spectacular. All of them looked very different and I cannot wait to see more 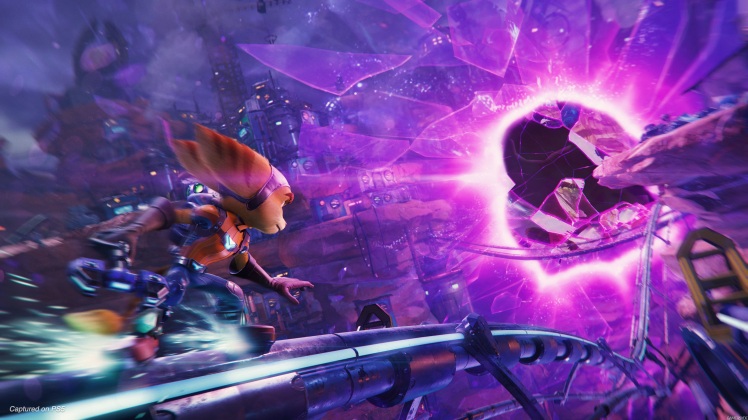 The biggest aspect of the trailer was the dimensional shifts which teleported Ratchet and Clank from one planet to another in next to no time. Visually it looked fantastic but from a technical standpoint, it is incredibly impressive.

There was no load times between dimensional shifts which is crazy. Insomniac says that this is only possible because of the PlayStation 5’s SSD. I’m not a technical wizard so I don’t know how it all works but I do know that it definitely wouldn’t run on my PS4. My PS4 sounds like a Boeing 737 when I play games, so I can’t even begin to imagine what sound it would make if Rift Apart was on PS4.

A couple of things  I want to know, is how often do these dimensional shifts appear and do they replace the space ship travel?

Crazy weapons are back!

It wouldn’t be Ratchet and Clank if crazy weapons weren’t involved and Insomniac confirmed that over the top weapons that fans love are back. We actually saw one in action at the PS5 reveal event. I couldn’t catch the name of it but it looked like a water sprinkler. When the water hit the enemies, they turned to stone which was pretty funny.

Given that we are on a new console that is considerably more powerful, I wonder what other crazy weapons we will see. Insomniac can go all out with them and I cannot wait to see what other zany weapons we get. I hope Mr Zurkon returns, he needs puny bad guys to shoot.

At the end of the trailer we saw a brand new character, one that is very surprising, as it is another Lombax. The new character is a female Lombax and Insomniac have said that she is playable which is awesome. This means we get to play as two badass Lombaxes in Rift Apart.

Another thing I saw at the end of the trailer was a hologram of someone who looked very familiar, the notoriously evil, Dr Nefarious. Is he the big bad in Rift Apart? It wouldn’t surprise me if he is or has Captain Qwark done something apocalyptically dumb again? We’ll find out more in the coming months.

What did you think of the Ratchet and Clank: Rift Apart trailer? Are you excited that the iconic duo are back? Let me know in the comments below.