There will be a few spoilers in this piece but I will limit them so they don’t negate from the impact of the story. That said, if you want to play the game blind you may want to stop reading after a certain point. 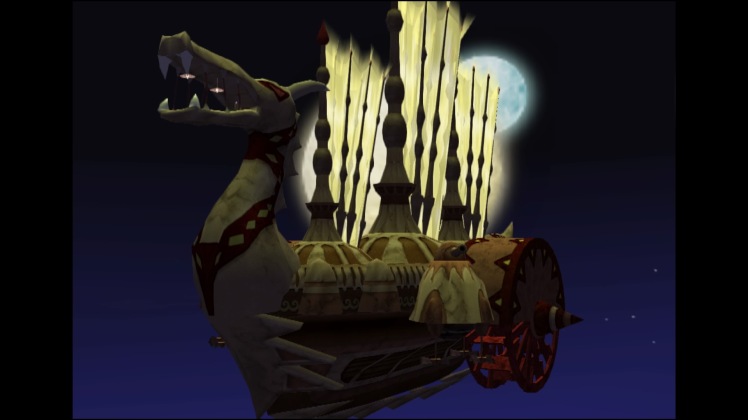 Dark Cloud is a game that has a very special place in my heart, it was one of the first games I played on my PlayStation 2 alongside The Bouncer and Tekken Tag Tournament way back in 2001.

I remember playing this on Christmas Day 2001 and falling in love with the dungeon exploring. I loved going through each floor of the dungeon, defeating monsters, opening chests for treasure and acquiring the Georama (more on that later). Every dungeon floor had a different layout so I had to do each floor pretty much blind until I got the map.

I loved exploring dungeons in Dark Cloud but the thing that I fell head over heels for, that would be “town building”. You can rebuild towns in pretty much your own vision and it’s a delight to see a barren wasteland slowly coming back to life. Buildings are bought back, people walk the roads, people can once again go home, shops are open once again and rivers are flowing once more. The thrill I get from rebuilding what is essentially people’s lives is exhilarating.

In May of this year, I decided to replay Dark Cloud again but this time was different, I wasn’t playing the game on a PS2, I was playing it on PS4 and in HD. Playing the game on PS4 does have some benefits over the original release, the visuals look crisper, colours pop out more and load times are a little bit better.

The big change in the PS4 version is the inclusion of trophies. Yes, you read that right, Dark Cloud has trophies and it has a platinum trophy for the completionists out there. I don’t need a reason to go and replay Dark Cloud but trophies are a nice and much-welcomed addition.

Whilst playing through Dark Cloud, I thought it would be a good idea to do a Retrovision of the game and maybe a “retro review”. I know we’re a few hundred words in already but prepare yourself, grab a coffee or any drink you like, sit back and let me tell you about the story, game mechanics and it’s heart.

A story about darkness, a lust for power and heartbreak (Spoilers)

The story is your usual JRPG affair; darkness, power-hungry villain, heartbreak, fantastical settings and even a little bit of time travel.

The story starts off when the leader of the Lagoon Empire Army wakes up the Dark Genie, an incredibly powerful and evil being who was sealed away a long time ago. The leader of the army commands the genie to attack the West. Thanks to the protective spell the Fairy King put on the land, the residents, buildings and many other items were locked away in orbs called Atla. It’s your job as the hero to rebuild the cities you visit and defeat the evil Dark Genie.

You play as Toan (name can be changed) a young man from Norune Village (Nolun Village in the PAL version) who has been contacted by the Fairy King and is chosen to be the one who restores the world and defeats the evil that has now plagued this land. Armed with just a dagger, the hero sets off on a long and arduous journey.

As you’d expect with a JRPG, there is a party of characters of which you unlock as you progress through the story. You befriend a cat that becomes half-human, half-cat that uses a slingshot. You join up with a genie (a good one) who uses magic armbands. The game features a wonderful and diverse party with each member having their own unique weapon, combat style and attitude.

The story is very good and feels somewhat traditional. It’s a bit slow to start off much like many other JRPGs but it’s one worth sticking with because it is so damn good.

We built this city! (No spoilers from here on)

Exploring dungeons is only one part of the game, another is city building. Towns and cities across the land have been destroyed and it’s up to you to rebuild them to their former glory.

You obtain building parts by exploring the dungeons and opening Atla orbs. Each Atla orb has a building, object or person inside. You can pretty much recreate the village in your own way if you want. The people that you rescue will have requests on how they want their home to look. Some residents may want to live next to a river, one might want to live next to a bunch of trees and one might want to live near a specific person. Fulfil these requirements and you will receive an item that will help you on your quest.

Residents have requirements for their own houses but they also have opinions on what they want the town or city to look like. These don’t really affect you but if you want to make the people even happier, you can make the town in their image if you want.

I love the city-building elements and it’s a feature which is also present in the sequel Dark Chronicle (Dark Cloud 2 is some regions). I wish more video games, especially JRPGs had this gameplay element but I’m not all that bothered really, it’s one of the things that make Dark Cloud unique.

I liked the music of Dark Cloud when I was a kid but now I’m older I absolutely adore it. Every village and dungeon has unique music and all fit their respective locations very well. Here are a few pieces of music from Dark Cloud, give them a listen.

The main theme for Dark Cloud is downright amazing. It’s funky, catchy and it gets me ready to play the game. Hearing that theme again after so many years warmed my heart and memories came flooding back. Here’s the main theme, listen to the gloriousness.

The complete soundtrack for Dark Cloud is on YouTube and if you love video game music like me, or you simply want to a trip down memory lane, check the video below. There’s also an extended version of Dark Cloud’s soundtrack on YouTube for those wondering.

Playing through Dark Cloud again has been wonderful, it’s nice remembering parts of the game that bring back so many memories. One thing I can’t remember was the attention to detail and that’s more than likely because when I was younger, I didn’t really notice all the small little details that make the game just that little bit better.

One of those little details is wind physics. Pretty much every outside area has wind physics and this is noticeable when you look at Toan’s garb. The main protagonist’s scarf is affected by wind, you can see flowing thanks to the gentle country breeze. Another thing I noticed was that each area has different wind speeds. It’s only a slight difference except for one, Muska Lacka (aka Muska Racka), where you can clearly see the increase in wind speed.

Wind affecting clothing is nothing new in video games but back then it wasn’t all that common. The fact that developer Level-5 were able to pull this off and to do it at the early stages of the PS2’s lifecycle is incredible.

Another small detail is the sound effects when you go up ladders, now I know this might not seem much but it’s actually rather cool. Each step is perfectly synced with the audio which you’d expect but if you listen to the noise carefully, it sounds almost as if the ladder is saying “come on”. Next time you play Dark Cloud go up and down a ladder a few times, you’ll know what I’m on about.

A game I will forever love

Playing through Dark Cloud again made me remember how much I absolutely love this game. This was one of the first games I played on my PS2 and I have so many fond memories of playing through this game. Even though I have completed it several times, this recent playthrough on PS4 still made my eyes glisten with amazement and wonder. It’s amazing, it’s a 17-year-old game, one that I have played through multiple times that even now when I’m older and more mature, still grabs a hold of my heart.

You know what? I feel exactly the same way if not more so about the sequel, Dark Chronicle, if not even more so. You can be sure that I’ll write about Dark Chronicle at some point, the game means so much

Longtime readers of my site will know that I will write pieces about retro games, whether it be reviews or a Retrovision article like this. If this is something you would like to see more of let me know in the comments below. Do you have an old game you would recommend to me, put it down in the comments below or you can tell me on Twitter – @ThatGreenDude95