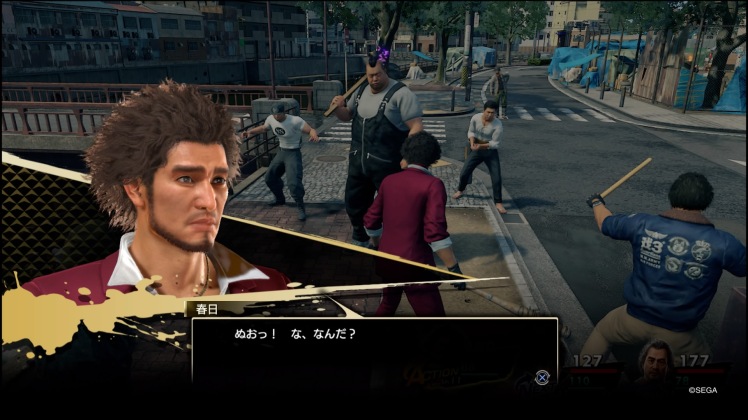 Yakuza 7 was officially announced a few months back and every Yakuza fan was excited until they saw one thing, the new combat system. It split the fan base in half with one half completely against the change and the other side, who were ready to embrace the change.

I was willing to give it a go, it is Yakuza (a series I adore) and I do like JRPG style combat. After playing the Japanese demo for the game I can safely say that I am fully on board with the new combat system. It is drastically different from previous entries in the series but longtime fans rest assured, it is still very much a Yakuza game.

Everyone is turn-based fighting huh! 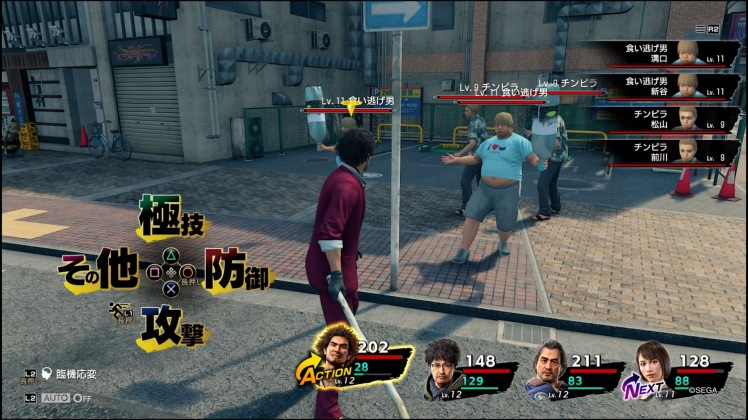 Let’s get the biggest thing out of the way first. The combat is no longer the beat em up brawling that the series is known for it is now turn-based, think Dragon Quest and Persona. I understand that turn-based isn’t for everyone but the system they have here is very good and honestly, is quite easy to pick up. Even with the demo being in a different language I was still able to get fully immersed with the combat.

The X button (I refuse to call it the “cross” button) is your basic attack. Press X and you will be able to select an enemy to hit. Pressing the triangle button will bring up a list of skills for the character whom you have control of at the time. Each party member will have different skills; some defensive, some offensive depending on their class/ job (more on that in a bit). The circle button will let you skip the characters turn, thus letting the person next in line to take up batting position. 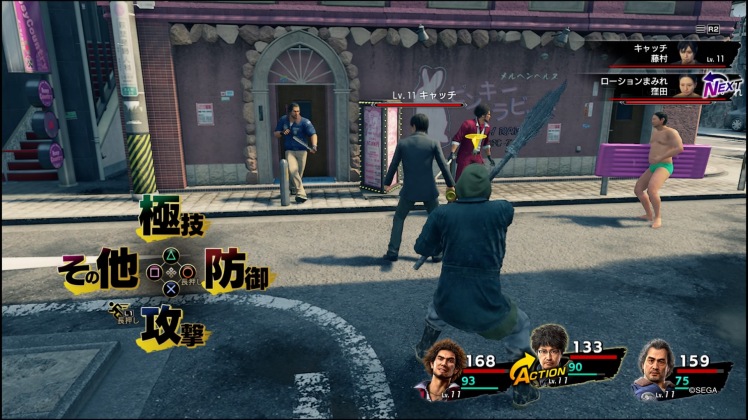 You’ll see on the screen that L1 and L2 are also used in combat. Holding the L1 button down will have your party attempt to escape from battle. Sometimes you can run from fighting but there will be times when the enemy won’t let you go, meaning you got to defeat them.

The L2 button has two uses. Pressing the button will enable “Auto” mode which will let the A.I. do the fighting for you. Whilst in Auto mode you can sit back and take a breather. Holding L2 down brings up a small menu that relates to the Auto mode. It brings up three options (these are in Japanese so I’m gonna do my best here) that allow you to change the behaviour of the party. One will make it so that your party goes for a more aggressive style; another option will make your party go on the defensive and the last one will see your team adopt an all-round approach.

Auto functions have been in JRPGs before, a recent example being Dragon Quest XI. It isn’t a new mechanic but it is sure to help fans of the series get adjusted to the change in combat. 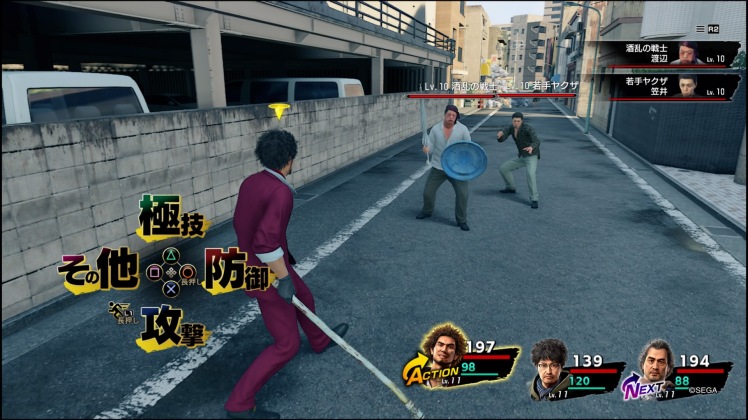 Heat moves are present in Yakuza 7, they are the moves that come up when you press triangle in combat. Each character and class will have different moves. For example, the main protagonist Kasuga Ichiban has an ability that uses a melee weapon that becomes embued with a blue flame and then does a massive swing attack that can hit multiple enemies. This attack does a huge amount of damage but it comes at the cost of some MP. It’s a standard JRPG affair.

There are also moves which I have seen be called “Kiwami” moves. These particular moves consume a lot of MP but they deal a lot of damage and some of them dish out punishment to multiple opponents. The increased damage isn’t the only difference to Heat moves, they also come with a short cutscene where the character performs the move. These cutscenes are nothing short of a spectacle as they are crazy and bombastic. Some of them are quite funny and one, in particular, had me rolling on the floor in laughter.

Summon an Eidolon. Wait, hang on, an army of crayfish? 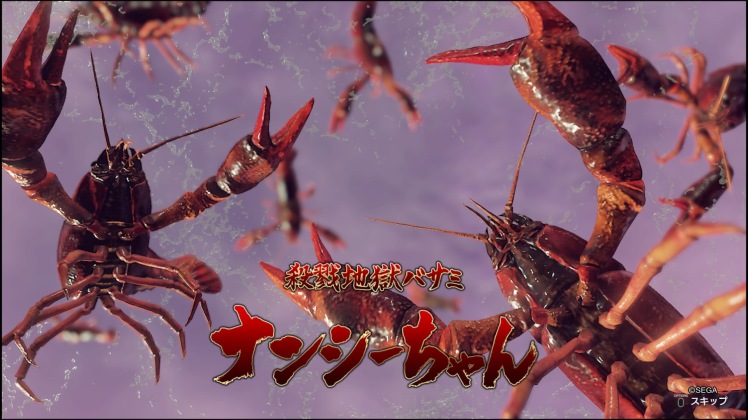 As mentioned before, Yakuza 7 features summons a mechanic common in JRPGs. Summons are a big grand spectacle and in other JRPGs they are really damn cool to look at. Are Yakuza 7’s summons an incredible phenomenon? Yes, yes they are and in typical Yakuza fashion, they are absolutely wacky as hell.

No summoning gods here in Yakuza 7 but you have the next best thing, an army of crayfish. You read that right, an army of crayfish and holy moly is it sight to behold. Watching Ichiban frantically flick across his phone and then hold it up in the air like some kind of 21st century He-Man had me in stitches. If that wasn’t funny enough, watching an army of crayfish fall from the sky and see one clip an enemy on the nose so hard that he bleeds had me rolling on the floor. It was dumb, silly, outrageous and I loved it.

A battalion of crayfish wasn’t the only summon in the demo. One was a lady that cooked food and it healed the party and another saw the return of a character, fans of the series know well, Gary Buster Holmes. There was another summon in the demo but this one was unlockable via sub-story and holy crap was it a funny one. The unlocked ability was a man baby that longtime fans might remember. 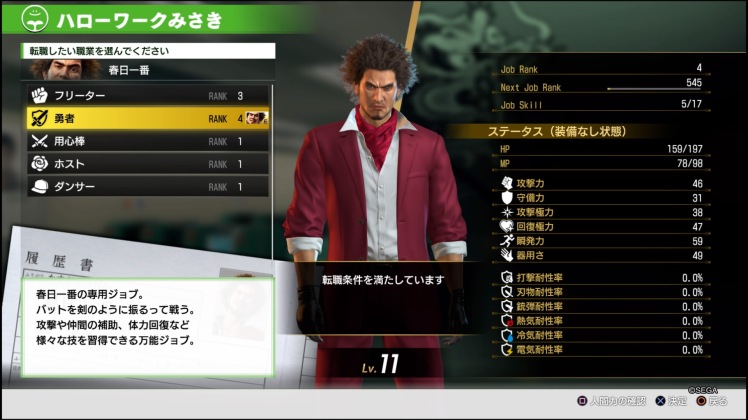 Yakuza 7 features a “job” system or as some call a class system. Each character in Yakuza 7 has multiple jobs which give them different stats and abilities. It looks like Ichiban will have the most jobs out of all the characters in the game but that makes sense given that he is the main character. The female party member only has two available jobs in the demo. I would imagine that more job types are unlocked as you progress through the full game but in the demo, she only had two.

Your character has two areas to level up; the character themselves has a level and their currently equipped job. A good example of this is provided in the screenshot above. Ichiban is level 11 but his equipped job is on rank 4. Your character’s level will remain the same regardless of which job you pick but if you switch from a rank 4 job to a rank 1, then your stats will decrease.

I’ll try my best at listing all the classes for each character in the game, forgive me if the translation isn’t 100% accurate. Ichiban has five classes; Brawler, Swordsman, Thug, Host and Dancer. Namba (the homeless-looking fellow) has four jobs; Mage, Thug, Dance and Host. The other male character has four jobs; Policeman, Thug, Dancer and Host. The female character has two jobs; Party and Idol.

Levelling up the characters in the demo seemed to go up at a steady rate and levelling the jobs seemed to be quick. This might change by the time the full game gets released but I thought it was worth mentioning 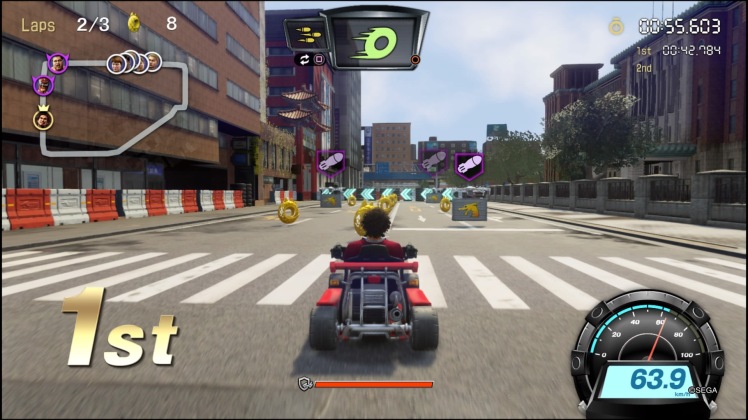 It wouldn’t be a Yakuza game if there weren’t minigames and the Yakuza 7 demo had plenty for me to try out. There was Shogi but I didn’t try that because I struggle to play it in English. Karaoke was present so I decided to have a good old sing-song. There was only one track in the demo which was upsetting as I love Karaoke, it was a good song though.

I tried out the three new activities introduced in this game and boy, oh boy are they fun. First up is trash collecting and whilst that doesn’t initially sound exciting, the gameplay for it is. It plays like Pac-Man, you ride a bicycle with a cart attached to the back of it picking up trash around a small area of Yokohama. The trash is represented as little dots and big piles are shown as big yellow dots. There are also hazards in this activity, there are other collectors that if they bump into you, you will lose your collected trash. There are also garbage trucks which are slow but take up more the road making them harder to get around. It’s a fun minigame and it is strangely addictive. 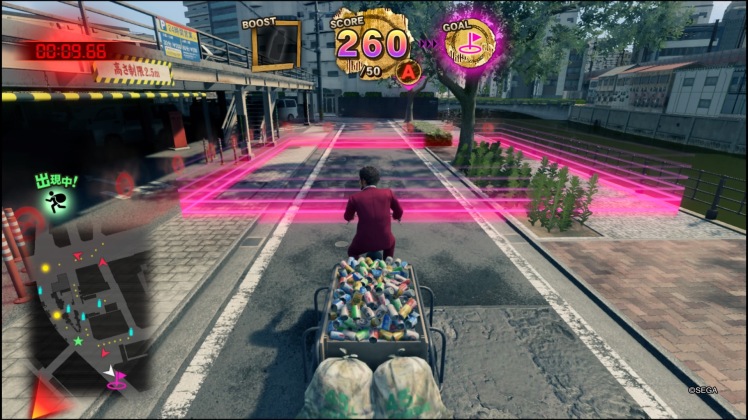 There is a go-karting minigame called Dragon Kart and holy moly is it good. Dragon Kart is a racing activity where you race against several other people and the aim is to come first. Like in other kart racers like Crash Team Racing and Mario Kart, there are weapons to use in the race. The weapons I saw were a machine gun and a rocket launcher and yes, an actual rocket launcher. Ichiban pulls out a rocket launcher and fires it at another racer. It is a wild ride but damn I had fun with Dragon Kart.

The other minigame is something that I never would have expected and whilst I don’t know the exact name, I’m going to call it; “Try to stay awake to watch the film and avoid the incoming attacks from man-goats”. If you think reading that sounds insane, you should try playing it. This is quite possibly the most outlandish activity ever in the Yakuza series and that is saying something.

The premise is rather simple, Ichiban is falling asleep at the cinema and you need to keep him awake. You keep him awake by defeating the goat people by pressing the presented buttons before they finish their attack. You can have up to eight of these man-goats on the screen wailing their arms around getting ready to fling a purple fireball at you. It is absolutely bonkers and I love it. 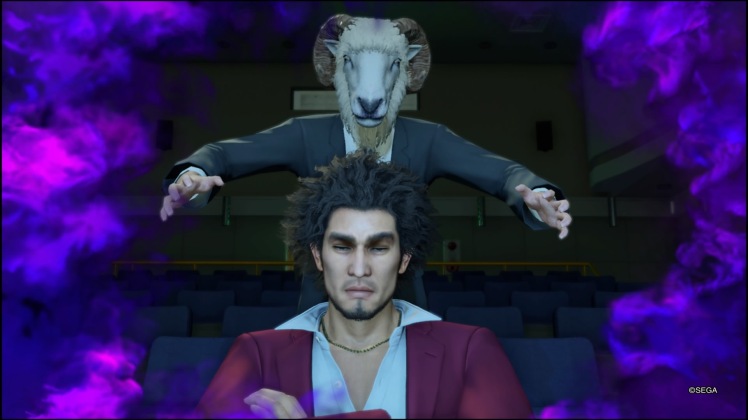 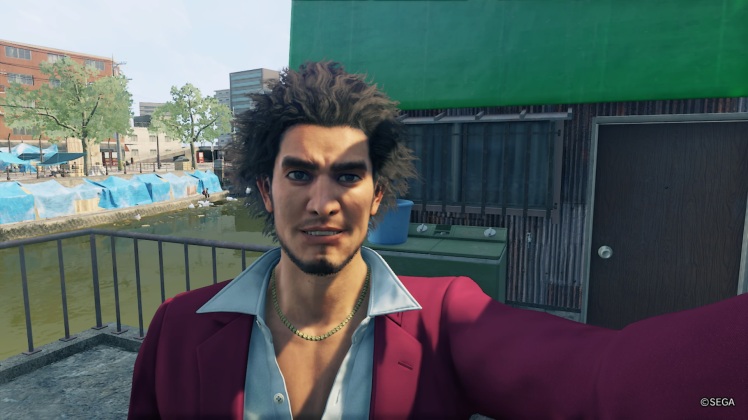 I went into the Yakuza 7 demo expecting to like it but to crave for the beat ’em up gameplay. Whilst I do miss the old gameplay, I am fully on board with this new JRPG style combat as the demo made me feel more confident in RGG Studios. It is such a huge change to replace the beloved combat system that the series is known for, to something which is pretty much the complete opposite. A change this big takes a lot of courage and I respect that.

Whilst RGG Studios have never let me down, there was this little bit of doubt in my mind that the new system would not be as fun and entertaining to use. Thankfully I was wrong and I love the new combat system. However, it doesn’t matter how much I and other people sing its praises, there will still be some of the Yakuza faithfull that will not like the change and that is fine. To those, I say don’t completely dismiss the game entirely. Whilst the fighting may be different it still feels like Yakuza.

Will the full game be good? Will it be as enjoyable as previous entries? Will the story be deeply engrossing? We’ll have to wait until next year.

Yakuza 7 releases in Japan on January 16th and later on in 2020 for the West.

One thought on “Yakuza 7 Demo Impressions”